Denver is second in U.S. in attracting renters from other big cities like New York City, Chicago and D.C.

Denver is second in U.S. in attracting renters from other big cities like New York City, Chicago and D.C. More renters from other cities in the United States may be making their way to Denver, but current residents of the Mile High City are looking to relocate to more affordable locations in Colorado, according to data released by ApartmentList.com in its Renter Migration Report.

Denver comes only second to Tampa, Florida, in the number of renters coming to the city from other places, based on ApartmentList.com searches from the 25 largest metro areas. Of the people searching for homes in Denver, 55 percent were coming from other areas, according to the website’s data. 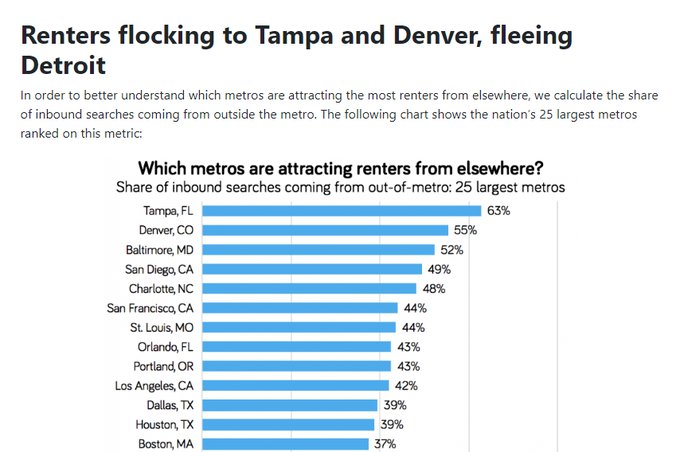 “Denver comes in second in this ranking as a thriving job market fueled by a years-long tech boom attracts renters from around the country,” the recently released report stated.

Despite the growing concern of some, Bay Area renters are not looking to move to Denver in large numbers — the metro area doesn’t even make the top 10 locations — rather they are searching within the greater Bay Area.

Still, Denver is getting its fair share of newly relocated residents.

“While the flow of renters from San Francisco to Denver may have been lower than we expected, the tech boom in Denver is definitely a real phenomenon,” ApartmentList.com stated. “We see the Denver metro attracting renters from other major metro areas with highly educated workforces.”

Some of the highest number of searches are coming from New York City, Chicago and Washington, D.C., according to the report.

Residents trying to leave Denver are mostly focused on other Colorado cities, with Colorado Springs being the most popular, followed by Boulder, Fort Collins and Greeley. About 69 percent of Denver renters are looking within nearby areas, with more than 30 percent looking outside of the metro area, the data show.

“These outflows from Denver to the more affordable surrounding metros are reminiscent of the pattern we noted above in the Bay Area, and likely speaks to growing affordability concerns in Denver’s housing market — this similarity between the two metros is one that longtime Denver residents are likely not thrilled about,” ApartmentList.com stated.

The patterns show that resident mobility area tied to economic mobility, according to the report.